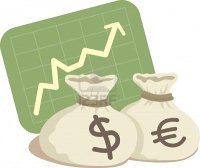 END_OF_DOCUMENT_TOKEN_TO_BE_REPLACED

Markets celebrated throughout the world last week when the European Central Bank decided to follow the lead of the US and the UK by printing money by the bucketload.

The euro, since it has existed, has been a strong and reliable currency. This isn’t because of the underlying governments, which are as bad as governments anywhere. Nor is it because the economies have been strong or weak. It’s because the Germany’s influence on the ECB prevented it doing anything idiotic, such as printing money, buying sovereign junk debt, or keeping interest rates at absurdly low levels.

As a result, the US dollar fell from 1.07 euro at the start of Bush Jr’s term to 0.77 at the end. The result: a 28% decline in the value of the US dollar. It would have been over 40% if the financial crisis hadn’t been engineered.