Home » RM500 Billion In Debt – Is The Malaysian Government Bankrupt?

“We are going bankrupt in five years time”

“Mismanagement and Corruption has made us poorer”

These are the routine statements you may have heard regarding the state of the Malaysian government finances.  But do they hold any water?

A while back, in Book 3 of the 259 Trillion Vs 5 Trillion Series, my co-author and I have presented the calculations of the US Government assets and compared them to the so called “mountain of debts” and found out that the opposite was the truth, that the US has far more asset than debt.  People with their own agenda use half-baked statistics to propel “unsuspecting” citizens to become angry and extremely emotional toward their own governments, masking their true intention, which is mostly for power grabs.  As such, with such roaring emotional outburst of various camps on small issues, I will try to dispel a few myths on the Government of Malaysia.  One should view things with brains and facts and not on sensationalized half-truths and emotion.

I have dispelled the myth on the increasing price of Roti Canai in my first Malay book, complete with historical prices and charts.  The conclusions was clear, relative to Malaysians income level, the price of roti canai has dropped significantly.  We can’t blame the government for everything, including the price of ordinary goods.

One such myth is the impending bankruptcy of the Malaysian Government.  One condition of being a bankrupt, is by having more debt than asset.

The following is an extract of the statement from the Government’s Accountant which, to a great extent, compounded the public’s perception that the government is doing very poorly financially.

The statement clearly implies that the government is withholding assets worth a mere 95+27 = 122 billion ringgit while the debt is now in excess of 500 billion.  But is it really true that the government’s debts exceed its assets, or in other words, bankrupt? 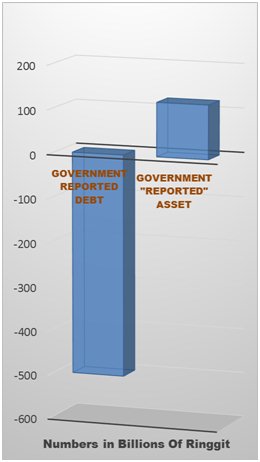 In the government’s consolidated and unified balance sheet statement, it was reported that the government was only holding a sum of RM27 billion in investments in select companies including that of Kumpulan Wang Amanah Pencen (KWAP) as of the year 2012.  Unfortunately it does not seem to mention the real market value of these assets, which is of many times greater.

Or take for instance that in the same report, it was mentioned that the government’s holding of Petronas is only worth 99.99 million ringgit.  Everyone knows that Petronas is worth a lot more than this.  Fortune500 as well as Petronas itself, reported that it is worth as much as RM521 billion as of Sep 2013 with an amazing 123 billion in an essentially all cash assets!

The investments made into Khazanah Nasional Berhad, a well known investing arm of the government, is worth only RM 5 billion according to the government’s report, but Khazanah itself puts the figure of all of its investments well in excess of RM134 billion, a really significant sum.  The government is simply aggregating the original money it invested into these companies; however the actual marketable value of these investments today is far larger.

To add to its burden, the government also listed the entire, I repeat, the ENTIRE amount of money in the EPF, as its financial obligation by way of government guarantees.  That is worth about RM480 billion at the end of 2012!  Now, this is a colossal amount to guarantee, but the government explicitly guarantees the entire savings of Malaysia’s future retirees.  Not just the EPF will take care of your retirement money, on top of that, the government itself guarantees it.  This is very similar to the banking system, where the bank guarantees all deposits, and the PIDM insure the majority of the deposits in the system while the government, although not being explicit, would guarantee the entire system as well.  [Note: as evident in 2009, the government then had publicly provided an express written guarantee to all deposits in Malaysian banks for a period of several years, without any limitation on the deposited amount] 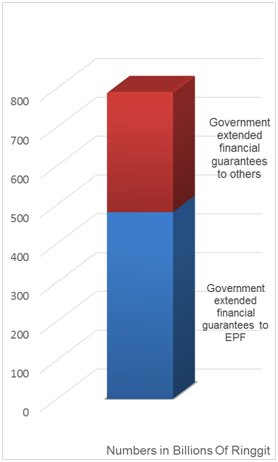 Nobody has a clear figure just how much the total assets owned by Malaysia Federal Government, but the total debt of the government (and the deficit) is published widely.  Currently the government owes as much as 500,000,000,000 ringgit (that’s 500 billion ringgit to be exact).  It takes a while to dig the relevant data and study them, so here it is for your consumption.

The reason why the government published a widely lower asset value compared to the “current” value is largely unknown.  When compared to other governments, they also declared far lower asset value than they actually holding.  This accounting anomaly is probably a legacy of old accounting standard which the government follows diligently.  Few corporations do the same to their balance sheet.  Even the Federal Reserve would publish its substantial gold holding at a mere USD35/oz which is the official gold price set by the Nixon administration in 1970’s, instead of the current market price of 1,250 dollars per ounce.  The difference in numbers is huge, it means that the US Gov is under-declaring its gold assets by a trillion dollars or more! Despite every incentive to revalue the holding value for spending purposes and credit worthiness purposes, the government has maintained its position.  Similarly in Malaysia, the government is also under declaring its assets value, even if by re-declaring the value it would have gained a significant political mileage.  Yet the government is often accused of manipulating and cooking the books, however I found no such evidence.  It is of little wonder that the Accountant General and those who actually read and study the balance sheet of the government routinely dismissed the critics of the government who would jump in no time (every year in fact) on their same misleading figures and harp about the impeding bankruptcy.

What does the government owns?

The government owns a significant chunk of the economic wealth, locally and abroad.  Take a look at its investment arm, Khazanah below, you don’t have to see each individual company, just observe the scale and breadth of the investments in many major companies, whether listed in the stock market or not.  Tenaga Nasional, the electricity producer and distributor, Pos Malaysia, CIMB Group, the toll operator and owner, PLUS, and many more such as ASTRO, UEM, Parkson, Axiata and Telekom are all essentially owned by the government. 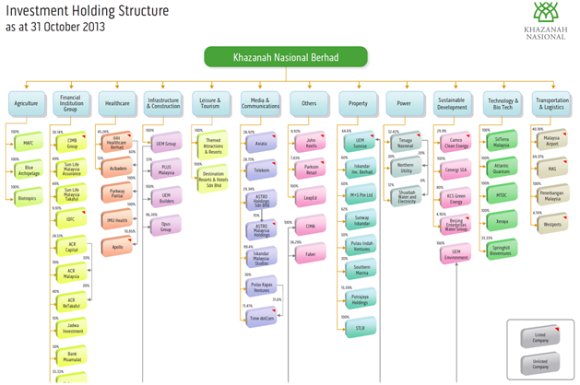 The total investments are worth in excess of 134 billion ringgit as recently reported by Khazanah.  The major GLCs are said to be having annual revenue exceeding 400 billion a year, far outpacing the revenue of the government itself.

The government also owns the following:

KWAP, Petronas, PNB, Tabung Haji, EPF, Bank Rakyat, Bank Simpanan and a dearth of other companies and institutions.  For the full list, click here.  Yes, National Feedlot Corporation or NFC is also listed inside.  Well, not all of the investments make money as it turns out.

Now for the full total:

There are too many zeroes in the total, so in billion, that’s 1,157 billion ringgit, or 1.157 trillion ringgit! This is indeed, much larger than the entire debt of the federal government of 500 billion.  A trillion is a number with 1 followed by 12 zeroes in it.  Therefore the Malaysian Government is actually far from being bankrupt and has tremendous resources at its disposal.

The table above took into account as much as possible (but surely not perfect) the portion of assets co-owned by others such as retirees’ monies in the EPF.  Despite having a fund size of 480+ billion ringgit, it is estimated that 105 billion ringgit is the true money of the government, which it can manipulate by changing the payouts to the retirees and from any yet to be declared profits.  We can also argue that 100% of the 480 billion is government controlled and owned, however this may not be reflective of the financial standing of the government.  Similarly, within Tabung Haji for example, the government has a portion totaling 48 billion ringgit, despite the institution having a combined total customer deposit and government controlled money of 90 billion.

Therefore, the frequent talks of the impending bankruptcy of the government were just mere talks, without supporting facts.  Now that you know the real facts, you should not be easily swayed by those who want to scare everyone for their own gain. 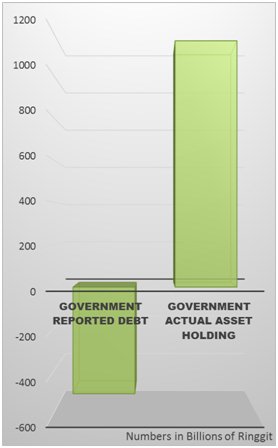 With more than a trillion ringgit in real assets, the government’s wealth is no doubt, owned by the public, that is, you and the rest of the populace.  This mean that each person in Malaysia owns as much as RM38,500 in economic wealth, held in trust by the government.

In terms of pure, cold hard cash, just how much the government is holding, or able to obtain within a short notice?  Based on the following estimate: 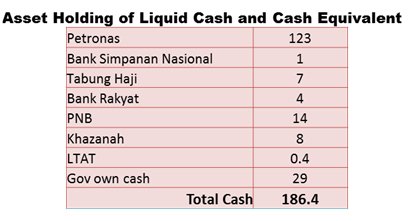 That’s a lot of cash, which the government can muster in the time of need.  This amount is so large, it is more than 9 months of government expenses.  How many of you, saved this much money for expenses, just in case? If 100 ringgit bills are stacked up on top of each other, it will reach a high of 932 km (space is only 300 km above the earth) or if laid next to each other, the bills would go around the earth four times.

The calculations also did not include the International Reserve of Bank Negara for reasons stated in Book 3 of the series.  The official amount is in excess of RM400 billion, which is again, a really massive number.  The external debt of the federal government? It is less than RM30 billion.  Therefore there is almost zero chance the government would or could be bankrupt anytime soon.  Bank Negara Malaysia is also capable of mustering unlimited amount of ringgit bearing papers if there is ever a need to access cash quickly by the government.  When I say unlimited, it is really is unlimited, it can be multiples of many billions or even trillions.

So the begging question now, if the government is so rich and have a trillion ringgit worth of assets, then just how large and how rich Malaysians combined personal wealth really is especially that they are the true ultimate owner of the government itself?

Sharif Rahman is the co-author of 259 Trillion Vs 5 Trillion book series as well as several other books including one in the Malay language. He can be contacted at his email at [email protected]

Next Post: Statistics of Units Trust Funds in Malaysia